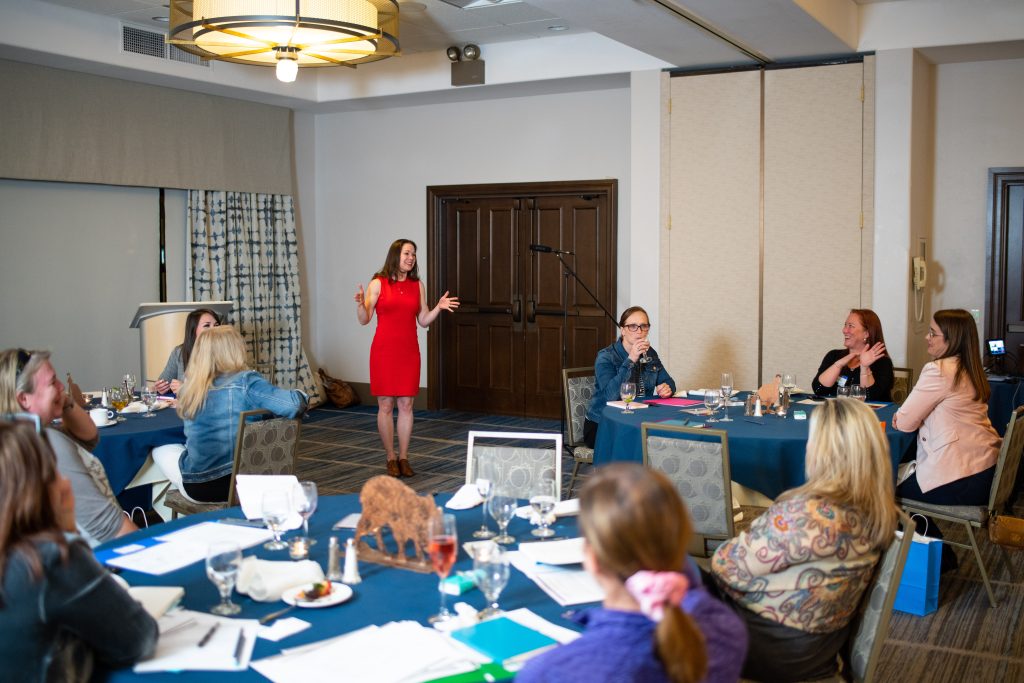 Want to join a community that gets you, where you feel seen, heard, and supported?

Want to connect and build friendships with other high-performing military and veteran women?

Want to be inspired, to learn and talk about issues that are relevant to you?

You've come to the right place!

Our purpose is to help you build relationships and experience personal growth so that you can feel connected, energized, supported, and fulfilled.

CLICK THE LINKS BELOW TO REGISTER FOR THE UPCOMING CALLS

These are complicated times in our lives and careers.

Join us as Life and Leadership Coach Lorilyn McCue guides us through an interactive exercise that will help you to determine your next steps.

On Thursday, February 2nd at 8pm Eastern, join us to connect and network with other women who understand you, and to receive valuable insight from leaders and coaches who have been there.

Lorilyn McCue is a leadership and career coach.  A West Point graduate, she flew Apache helicopters and taught at West Point.  She has worked in tech startups for 6 years, and earned her MBA from Stanford Graduate School of Business.  Lorilyn’s interactive workshop teaches women to find and pursue their passions and career goals by leveraging the power of design thinking.

“The world opens when competency and capability dictate what people can do rather than an adjective.” – LTC Lisa Jaster, author of Delete the Adjective

We believe that the “what right looks like” leader archetype must evolve.

We must choose to define leadership only by effectiveness.

It’s time to disrupt millenia-long held social and cultural norms about what leadership looks like.

Let’s get past all the shit that has conditioned us to believe that we’re “supposed” to be this or that, so that we can lead effectively, as ourselves.

Join us on Thursday, March 2nd at 8pm Eastern for an intimate, interactive discussion about deleting the adjective with guest expert: Army Ranger, leader, speaker, and author LTC Lisa Jaster.

Lisa Jaster is an American soldier, combat engineer, and one of the first three women to graduate the elite United States Army Ranger program in 2015. One of the most difficult combat training courses in the world, Lisa was the first reservist to complete the course. She graduated at age 37, while the average trainee age is 23. Lisa, an athlete focused on strength training and Brazilian Jiu Jitsu, has a deeply rooted understanding of the importance of perseverance through continual progress and growth, as well as an ingrained respect for camaraderie and selfless service stemming from a noteworthy active-duty career (including tours in Iraq and Afghanistan).

Prior to receiving her esteemed Ranger tab, Lisa worked as an engineer with Shell Oil in Houston and an Army Reserve individual mobilization augmentee with the U.S. Army Corps of Engineers. Her background in both the military and corporate worlds allows her to connect with any audience to create a memorable experience. Lisa initially was commissioned in the Army in 2000 after graduating from the United States Military Academy at West Point and returned to the reserves in 2012 after a 5-year hiatus from serving. She volunteered for combat training when she discovered the Army Ranger course was being opened to women for the first time in 60 years as a U.S. government experiment to see how women would fare in the notoriously brutal program. Lisa is the recipient of numerous military accolades including two Bronze Star Medals and the Meritorious Service Medal.

Lisa left active duty in 2007 and started a family and civilian career with Shell but returned to the Army as a reservist in 2012. She worked with Shell Oil Company as a project manager and construction engineer for twelve years before spending time as the Director of Civil Engineering for M&S Engineering. Lisa holds a BS and MS in Civil Engineering. In 2019, Lisa decided to leave corporate positions and start working as a consultant. She is currently a partner in The Talent War Group – a management consulting and executive search firm where she focuses her efforts on training management teams, executive coaching, and keynote speaking. She also works with Leading Authorities, LLC as a keynote speaker. She is scheduled to release her first book, “Delete the Adjective,” in January 2023.

Lisa is married to Marine Col. Allan Jaster, also a reservist and principle/owner of the Financial Advising Firm, Archer Consulting. Lisa credits the support of her family as being the reason why she was able to complete her training as a Ranger. In her spare time, she enjoys competing in whatever she can get herself talked into which has ranged from Brazilian Jiu Jitsu tournaments and CrossFit Competitions to an Ultra Trail Run and an IronMan. Lisa and Allan have two children together, Zachary and Victoria, and live in New Braunfels, Texas.

Working Moms – Overcome the stigma, guilt, and other nonsense around getting help.

Despite women making up a strong proportion of the workforce, household tasks are still the woman’s responsibility in most households.

For the women leaders who are investing in the help that they need to successfully manage careers and home responsibilities, statistics show that they feel ashamed to admit it.

This has to change.

Join us on Thursday, February 8th at 8pm Eastern to hear from guest experts COL Katie Matthew, Ph.D. and MAJ Erin Williams, M.S. on how we can overcome the stigma and guilt associated with investing in the household support we need.

Authenticity in Leadership: How to  Live and Lead as Your Authentic Self

From early childhood, women are conditioned to think and behave in certain ways.  As humans we work to become what will be approved of in our environments – sometimes at the expense of being who we truly are.

But to be at our best – we must be our true, best selves.

How do we live and lead authentically in a world that is constantly telling us who to be?

In this interactive discussion, we’ll explore:

Join us on Thursday, April 6th at 7pm Eastern to hear from guest expert COL Andrea Peters on how we can live and lead as our authentic selves.

Andrea M. Peters, MBA, PMP, PhD. is an active duty Army Officer, thought leader, and advocate for positive and equitable change.  She is the Co-Founder of Culturally and Racially Intelligent Literacy.  She is a driven leader who sees gaps and seeks to fill them in order to make any organization more efficient, human centric, and inclusive. Her passions lie in inspiring and developing others to realize their full potential despite setbacks. She stays busy keeping her mind sharp through poetry writing, research, entrepreneurship, philanthropy, and raising her daughter and two funny pets (cat-dog and puppy).

Lieutenant Colonel Andrea Peters is a graduate of the United States Military Academy who commissioned into the Army’s Engineer Corps in 2002. She holds a Bachelor of Science degree in Aerospace Engineering, a Master of Science degree in Civil Engineering from Missouri University of Science and Technology and a Business Administration degree from the University of Phoenix. She has earned her doctoral degree from the University of Miami in Industrial Engineering with a focus in Human Factors. Her military assignments include Engineer leadership positions in South Korea, Virginia, Kuwait, Colorado, New Mexico, Iraq, and Afghanistan.  She was recently an Assistant Professor in the Department of Behavioral Sciences & Leadership at West Point, NY. Her current position is as the Chief of Engineer Programs Division at the United States Forces Korea (USFK) in Pyeontaek, South Korea.

Outside of her military role, LTC Peters is Dr. Peters. She works in the space of Diversity, Equity, Inclusion, and Access with a focus on women and children.

She believes in the ability of the collective effort of humanity, but not without some individual healing and equitable practices being realized at each end of the spectrum. To this end, she has dedicated herself to providing space for reflection, growth, and ultimately healing. She does this as the Co-Founder of Culturally and Racially Intelligent Literacy (CRIL). Dr. Peters is the Founder of Xpresso Unicorn which seeks to realize the true beauty, uniqueness, and value of often silenced voices of our world. She also serves as the American Ambassador and Fundraising Chair of Advocates For Equal Justice Initiative (ADVEJI) out of Uganda focused on Kampala women and their children.

Dr. “Pete” Peters has one daughter, Alysia Peters, who is a freshman at George Mason University, and two fur babies; Tora the cat and Bella the dog.

You don’t want to miss this discussion facilitated by Pete!!

Transitioning from the Military: Reinventing Yourself, Finding Your Next Career, and Creating Your Best Life

Transitioning from the military is so much more than changing jobs.

It changes your whole life.

It requires a shift in your sense of identity, smart decisions about a new career, and a willingness to learn new things – and unlearn a lot of stuff too.

It can be intimidating, lonely, confusing, and overwhelming.

With expert guidance and community support, you can successfully navigate your transition from the military.

You can reinvent yourself, find a new, right-fit career, and create a life you truly love.

Who is this call for?

– Women who are about to transition from the military,

– Women in the middle of a military transition,

– Women who have transitioned from the military are still looking for the right fit career,

– Women have insight to share and encouragement to lend to those transitioning, and

– Military and veteran women who want to be in an awesome conversation with awesome, like-minded women, as a part of a community.

Join us on Thursday, May 4th at 8pm Eastern to for an interactive discussion with guest experts Julia Ruddock and Alice Garcia.  Their advice and recommendations will help you find your right-fit career and create an aligned life you love.  You do not want to miss this conversation with these two amazing leaders and coaches!

Julia Ruddock is a Career & Workforce Development expert and Certified Career Coach focused on delivering world class transition experiences for the military community. She also partners with Fortune 500 companies and SMBs to help them build and refine their military veteran recruiting programs.

After completing active duty as an Army Combat Engineer, Julia has spent the last 11 years designing and leading talent acquisition programs and career services teams across the Banking, Technology and Higher Education sectors. Most recently, she founded and directed West Point’s first-ever career services program that (over the last 4 years) enabled 1,000 West Point graduates – both transitioning military and industry-experienced – to pivot effectively to their employers of choice after service.

Alice Garcia is a business owner, business strategist, and coach at FourBlock, an organization empowering service members to transition from military to civilian life.

After graduating from West Point, Alice served in various leadership positions in South Korea, Texas, and at West Point, New York.  She shares that she “got stuck” in Army JROTC in high school and it changed her life. As I learned about the Army and the basics of leadership, she discovered her own inner leader. Since then, her passion for leading people has led her around the world in the Army and across several different business areas, both in corporate and as a business owner.

She is happiest when solving problems, turning chaos into order, learning new things and coaching others. In her free time, she’s traveling, checking out restaurants with friends, doing hot yoga, hanging out with her two enormous and high-energy pups, or devouring a book.